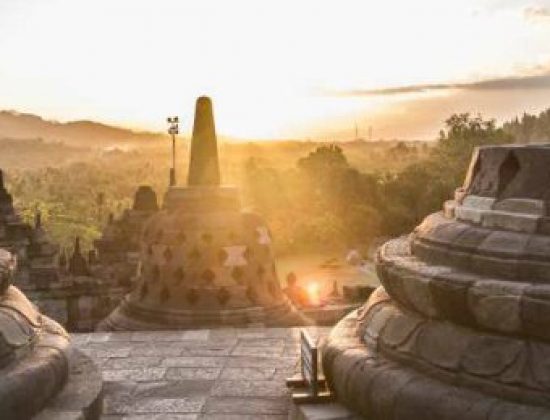 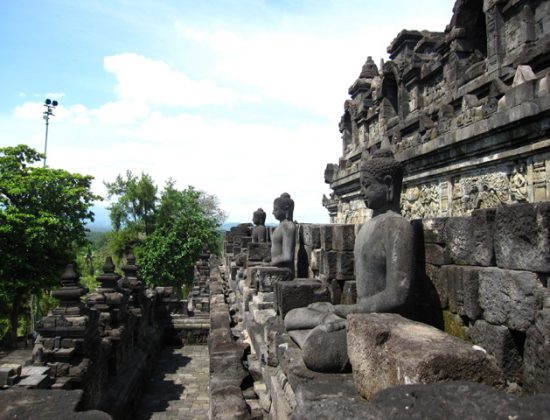 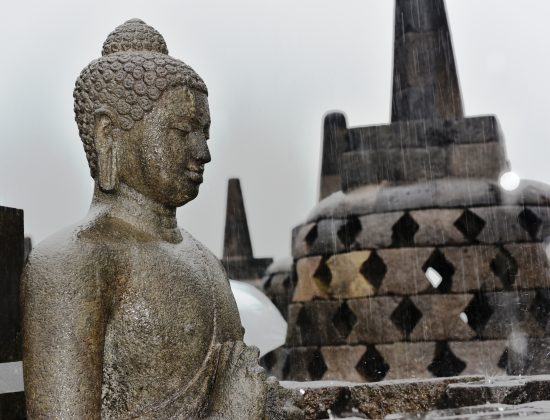 One of the world’s most striking sunrises can be seen from the temple of Borobudur – the largest Buddhist temple on earth – on Java Island. Built in the 9thcentury, this ancient temple has seven stories amassed in a splendid pyramid structure.  The top tiers of the temple are covered in stupas, with each housing a Buddha statue. Surrounding the temple of Borobudur are forests and volcanoes, creating a fittingly dramatic feel for its glorious violet-hued sunrise.

Borobudur stupa was the cosmic mountain, the ancestor step-pyramide and main sanctuary of the Sailendra dynasty.
The groundplan is like a mandala composed of circles and scuares as used by the Tantric Buddhists in Nepal and Tibet. The scolar found the division in three sphares or datus, namely Kamadhatu – sphare of Kama, desire (taken from Karmavibhangga text in which the law of cause and effect is shown); the Rupadhatu – sphare of forms; Arupadhatu – sphare of detachment from desire and form.

At Borobudur  Stupa there are 432 statues of Buddha which are found at Rupadhatu.  At the east side of the stupa, there is a statue of Aksobhya, at the north, a statue of Amoghasiddhi, at the west a statue of Amitabha, and at  the south a statue of Ratnasambhava. At Arupadhatu there is also a statue of Vairochana .