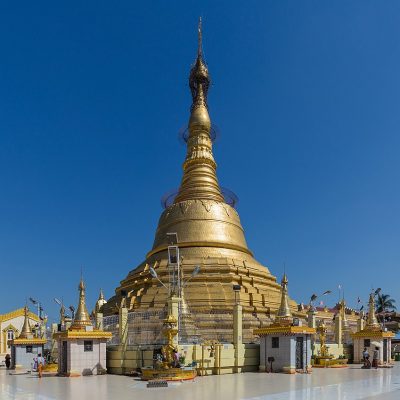 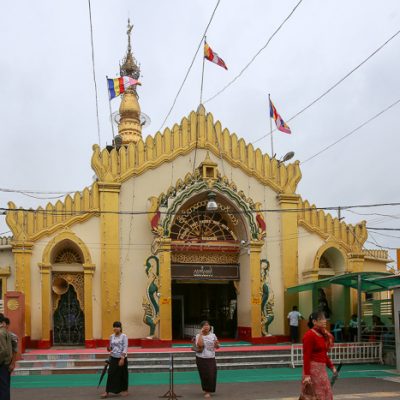 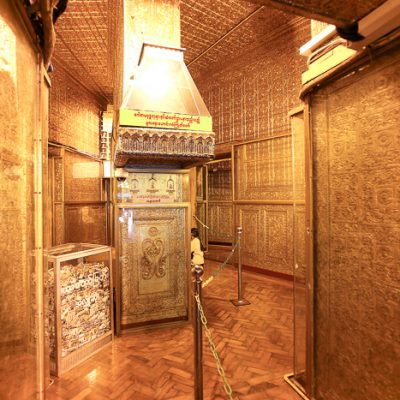 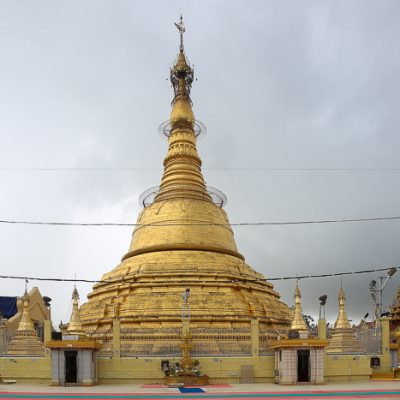 Botataung Pagoda stands along the southeast side of Yangon near the waterfront. Although according to Stadtner it “was one of many similar stupas in and around the Yangon area whose foundations date to the first millenium” (Stadtner, p. 118) its recent history is permanently tied to the events of Nov 8th, 1943 when Royal Air Force bombers scored a direct hit on the pagoda (at the time, Yangon, like the rest of Burma, was under Japanese control, and the R.A.F. was aiming for the adjacent wharves). Although most of the pagoda’s architectural treasures were irretrievably lost, the bombing provided a unique opportunity for archaeological exploration of the pagoda’s substructure, leading to the discovery of relics hidden for centuries. The modern history of the pagoda after the bombing is a tale of how the relics became the focus of the pagoda’s reconstruction and re-integration into the mythological fabric of the city and its monuments.

The site of the Botataung pagoda was likely used since time immemorial, but historical records are scant until fairly late. Stadtner believes that it first grew in importance during the reign of King Alaungpaya (r. 1752-60), when Yangon supplanted Bago as the country’s main coastal trading center. At the time the pagoda was probably outside the bounds of the riverside stockade built in the 1750s, though it was close enough to be used by Yangon’s inhabitants. The pagoda made its first appearance on a map of Yangon in the 1850s where it is captioned as the ‘Botataung Hpaya’, suggesting that it was an active, named center of worship and not one of the many nameless ruins of old pagodas that dotted the surrounding landscape. The pagoda probably flourished in the years up to the bombing but there is little of import in the historical record. It is, however, known that many of the British soldiers who perished in the battles of the 2nd Anglo-Burmese War of 1852 were buried on land adjacent to the pagoda. Their graves were moved to a European cemetery post-independence.

Prior to the bombing the pagoda was associated with the legend of King Bawgathena who was believed to have enshrined relics inside the solid-core pagoda. The legendary king either lived concurrently with the historical Buddha, around 2,500 years ago, or flourished as late at the Third Buddhist Synod which took place in 250 BCE under the patronage of Asoka in India. In any case, the legend stated that Bawgathena gathered various hair and bodily relics of the Buddha from Sri Lanka and enshrined them in multiple pagodas in the Yangon area including the Sule, Botataung, and Kyaik-kasan pagodas. Although it seems unlikely, if not impossible, that such relics could have survived over 2,000 years at the Botataung, events following the 1943 bombing convinced many that the legends were true.

A stupa is a type of reliquary that is never intended to be opened. Although a king or other benefactor might gather relics and place them inside, once sealed, worshippers only gain merit indirectly by circumambulating the stupa with the knowledge that a powerful relic is enshrined within. They never expect to see the relic firsthand, and even when a stupa is renovated a common practice is to simply add additional layers to the surface, perhaps enshrining new relics, so that the original relic at the center is further removed from the worshipper than before.

Although tragic, the bombing of 1943 provided a unique opportunity—the superstructure of the pagoda was obliterated, but it quickly became apparent that the primary reliquary had survived, as it was buried some feet below ground level.

The discovery was made as the pagoda was being rebuilt. Following independence from Britain, the Burmese government created a Rehabilitation Committee to restore the pagoda, and one of their first acts was to clear away the worst of the rubble. When the ground was roughly cleared, the committee met on January 4th, 1948 to symbolically drive 5 gold pegs into the ground—one at each corner of the pagoda’s boundaries, and one in the center of the site. The committee further cleared away additional rubble–finding a number of coins and other above-ground treasures which had survived the bombing—but also unearthed a strange stone box about 10 feet below ground level. According to U Ohn Ghine (writing in 1953), the box measured about 6.1m x 6.1m x 1.8m and was shaped “like a huge pot placed up-sided down to cover completely what lay inside” (Ohn Ghine, 1953). The box was opened, and inside was a stone casket shaped like a pagoda, measuring 1 meter in height and 58 centimeters in diameter. The casket was surrounded by figures of nats (minor deities) carved of laterite and probably placed there to act as guards. The casket was in good condition, but mud had infiltrated the larger chamber and partially buried it. Apart from the stone casket, over 700 items were found in the chamber, including a number of terracotta tiles which remain on site.

The stone casket presented a dilemma, for it was obviously the heart of the relic chamber. Even at this late stage, the discovery of a relic chamber did not automatically mean that it would be opened. Ohn Ghine notes that 15 leading religious leaders were called to debate the propriety of opening the object:

“At this meeting, on the advice of these Bhikkhus, that as an act prompted by good motives and religious faith it would be quite meritorious to open the casket, it was unanimously decided to do this in the presence of the members of the Committee and the public.” (Ohn Ghine, 1953).

The opening of the reliquary took place in front of an audience which, as Ohn Ghine noted, included members of the public. First, the outer casing was removed, revealing an inner cone-shaped casket shaped like a stupa, complete with a series of rings on its spire. Precious items including gold and jewelry were located around the base. The second, inner casket was then removed, revealing two small objects—an 11 centimeter high gold stupa and a small statue of Gavampati, a corpulent monk. The golden stupa was lifted up, revealing a tiny gold cylinder measuring about 2 centimeters in length with a diameter of about 1 centimeter. Inside were two small body relics (likely bone fragments) that were “the size of a mustard seed” and a “sacred hair of the Buddha”. The hair was coiled and fastened with lacquer which included traces of gold plaster.

The discovery of the hair relic seemed to validate the legend of King Bawgathena, as it seemed unthinkable that such a hair relic inside a Buddhist monument would belong to anyone besides the Buddha. Ohn Ghine in particular gushed that “There were those who in pre-war Burma were ready to doubt the real existence of the ancient relics and the accounts of the old histories. It has been said that “Sometimes out of evil cometh forth good” and the old histories were to be vindicated by the trials and misfortunes of war.”

Curiously the association of the pagoda with Bawgathena, given new credence with the discovery of the hair relic, proved less durable than expected. In the mid-1950s, the government and senior monks began to associate the hair relic with the legend of two merchants from Burma, Tapussa and Bhallika, who purportedly met the Buddha in the northern Indian town of Bodh Gaya and received a set of hair relics to take back to their homeland (see the Shwedagon page for more detail). Instead of Bawgathena, the two brothers were now lauded as the source of the hair relic found inside the Botataung, thereby linking the founding of the Botataung with the construction of the Shwedagon (which was created to house the remaining hair relics). Stadtner notes that the connection to the two brothers was aided by the Botataung’s proximity to the wharves, as the brothers arrived by boat bearing the relics from India. The relics were protected on site by 1,000 soldiers, leading to the pagoda’s name—”bo” means “army officer” and “tataung” means “1,000”.

The association with the Shwedagon boosted the fame of the Botataung and increased its value as a place to make merit. The decision of the national government to invest in the pagoda’s restoration became all the more justifiable and beyond reproach.

Historical Origins of the Botataung?

The concretion of myth and legend surrounding the Botataung makes it all the more challenging to ascertain the actual age of the site, but the underground relics provide some clues. One important hint is the presence of Gavampati statue inside the inner reliquary (Gavampati was one of the ten original disciples of the Buddha). The statue included traces of lacquer, a material not used in the Bagan era (11th-13th centuries), suggesting that it dates from no earlier than the 14th century. The terracotta tiles are another piece of the puzzle, as they appear to date from a variety of eras. The earliest feature characters that Luce identified as 7th century inscriptions, whereas others may date to the 15th century or later. The wide disparity in ages is not remarkable as older tiles were commonly mixed in with newer ones. More problemmatic for the historian is why such tiles were mixed in—for instance, does it indicate that a 7th century stupa was broken into (perhaps through natural disaster) and rebuilt with 15th century additions? Or, were 7th century tiles collected from another location and added to the reliquary in later centuries?

More curiously, the fact that the legend of the hair relic was “correct” suggests the possibility that an oral tradition persisted for centuries following the internment of the relic in the hidden chamber. Of course, the persistence of such knowledge is more likely if the reliquary had been established in, say, the 15th century than in the 7th.

In the end, all that can be said for certain is that the pagoda contains probable 7th century objects (or even items from the 5th and 6th centuries, per Stadtner), though its reliquary was likely not built earlier than the 14th century.

The pagoda now sits on 6.5 acre site and measures 40.1 meters in height, and 29.3 meters across the base. The body of the stupa is built of reinforced concrete gilded with precious metals. As with the Maha Wizaya and World Peace pagodas, the interior was left hollow so that worshippers can interact directly with the interred relics. At the Botataung, a number of narrow triangular-shaped rooms converge at the central point where the hair relic is on display inside a small gold cylinder (the hair itself is not visible, but its case is viewable). The interior passages are also built of precious metals and wooden floors. As the cramped interior passages lack natural lighting and ventilation, electric lighting and powerful air conditioning keep the interior bright but cool. When visiting in the warm summer months, the chilly interior of the pagoda is a pleasant respite from the heat and humidity.

The interior also houses display cases that show a number of the relics found during the restoration process.