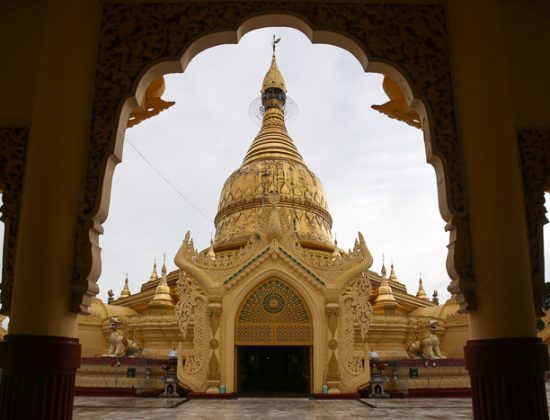 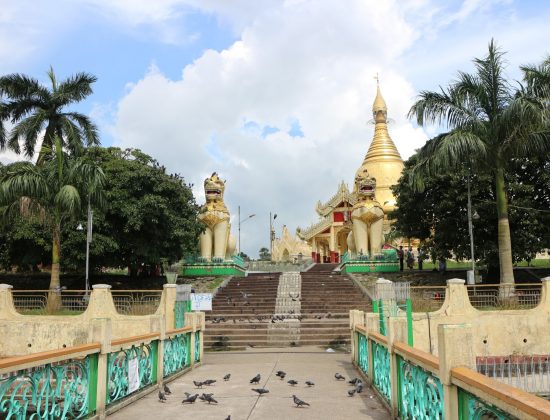 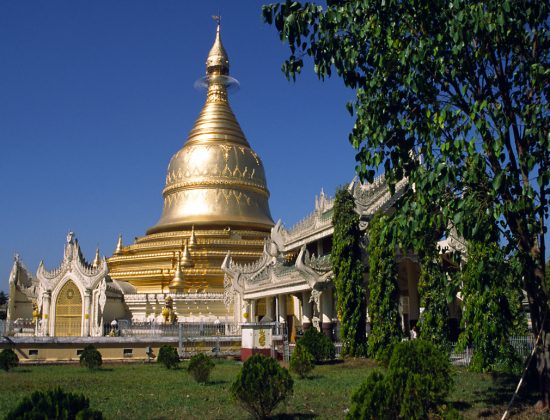 The Maha Wizaya (Great Victory) Pagoda stands on a small hill a mere 460 meters southeast of the great Shwedagon Pagoda. Although it was built in 1980 during the rule of the isolationist leader U Nu, it is a beautifully proportioned monument that honors an important moment in modern Burmese history—the unification of the Burmese sangha(monastic community) under one leadership.

The name “Maha Wizaya” is not new. As early as 1820 King Bagyidaw (r. 1819-1837) built the Pahto-daw-gyi pagoda in Amarapura, formally known as the Maha-wizaya-zanti-hpaya (Great Victory Pagoda). Though that pagoda still stands, its design and execution is drastically different from the Maha Wizaya at Yangon, and there is no evidence that one inspired the other. Instead, the latter Maha Wizaya must be seen within the context of Burma in the late 1970s. At that time, Prime Minister Ne Win (1911-2002) was securely in power, ruling the country as head of state—a position maintained since 1962 (though he had also served as Prime Minister from 1958-1960). Unlike his predecessor, U Nu, Ne Win was only lukewarm in his enthusiasm for Buddhism, as he was more interested in advancing his “Burmese Way to Socialism” which stressed the primacy of the military, economic self-sufficiency, and nationalist identity. While Buddhism was far from suppressed, Ne Win was concerned by corruption within the sangha and the large number of schisms within the Buddhist orders—a reality antithetical to the orderly dream of socialist harmony that Ne Win championed.

Ne Win took matters into his own hands, granting official recognition to only nine specific sects and purging the others. The remaining nine were brought together under one umbrella, thereby unifying the sangha for the first time in modern Burmese history. The new National Sangha Mahanayaka Council would henceforth ensure standards in monastic education, proper conduct, and recognition of official sects. To commemorate this act, Ne Win solicited public donations to build the Maha Wizaya, an enduring monument to the unity of Buddhism. At the same time, Ne Win may also have been reasserting the traditional prerogative of a strong leader—the right to build grand pagodas as a testament to the power of the kingship and the state, as had been done many times throughout Burmese history.

The design of the Maha Wizaya departs from traditional models in several ways. First, it was built with no fewer than eight entrances symmetrically arranged. Traditional Burmese zedi generally employed up to four entrances facing the cardinal directions, and occasionally used five entrances in exceptional cases such as the pentagonal monuments at Bagan. The use of eight entrances was probably intended to recall the Buddhist Eightfold Path and other “eights” such as the Eight Auspicious Symbols. A second unusual feature is that the monument is hollow with the main “Relic” in full view of worshippers—a Buddhist image donated by the Nepalese royal family, along with soil taken from the putative birthplace of the Buddha. The use of “hollow” stupas began during the rule of Ne Win’s predecessor, U Nu, who constructed the Kabe Aye “World Peace” stupa in 1952 which utilized a metal strongroom at its core, fitted with doors that could be opened daily to worshippers. The hollow core of the zedi also offered an opportunity to decorate the surroundings, which are liberally filled with artificial vegetation and a false sky fitted with zodiacal symbols. Although the ceiling comes across as somewhat amateurish, the fake “trees” surrounding the central chamber are convincingly designed and are even fitted with nameplates identifying each “species”.